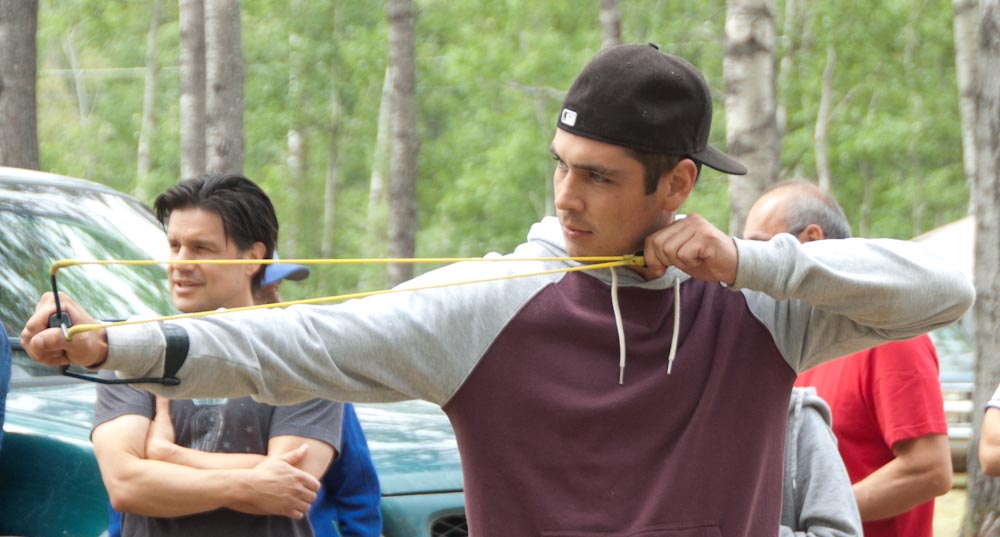 Pemmican Days at Saulteau First Nation was three hot days of contests, games, food and friends. Two moose were cut up to be roasted or smoked.

“They’re just volunteering because they want to eat moose meat,” Vern Lalonde joked as people swarmed the butcher’s table. Two low fires smoked away with drying racks over top where the dry-meat sat. It takes two to three days, depending on weather, for the meat to dry so judging was based on cutting skill. Getting just the right consistent thinness is what won Desiree Napoleon top prize for this contest.

Archery, axe throwing and sling shot competitions were held for men and women. Lots of people signed up, whether they thought they had a chance or not.

“I’ve signed up but I don’t know what to do,” said one axe-thrower.

“Get it in the tree,” his friend helpfully told him.

Pugeeseee (hand games) and horseshoe competitions ran throughout the weekend as winning teams advanced forward towards the cash prizes.

“Teams advance to A, B or “c” ya later,” Barry Davis joked while scorekeeping for one of the A horseshoe matches.

Bud Napoleon started Pemmican Days 30 years ago to get more activities going in the community, around the time when Treaty 8 Tribal Association was formed. Initially, Pemmican Days also included legal workshops around treaty rights. Napoleon wanted his community to better understand their treaty rights, especially around the time when former prime minister Pierre Trudeau was talking about repatriating the constitution, which would have very real impact for First Nations.

“There also used to be more activities, like horseback wrestling. Instead of going one on one, they’d all go in one group, so if she was right next to me,” he said, gesturing to the visiting elder sitting beside him, “if I had a chance to grab her and pull her off her horse I’d do it.”

“I never ever thought it would last this long,” Napoleon said.