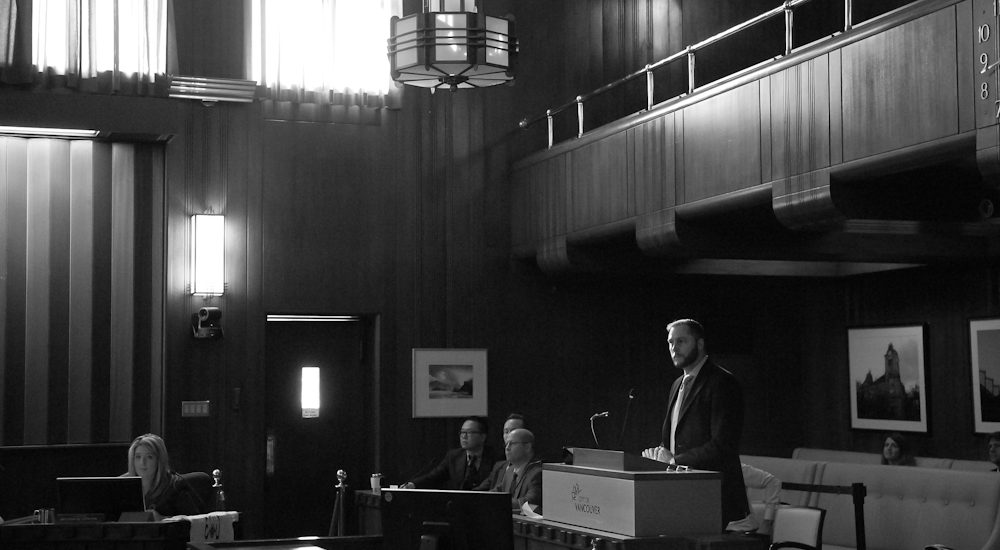 City Council voted in favour of becoming the greenest city in the world with an action plan that will see Vancouver become an exclusively renewable energy city within 35 years, with zero carbon emissions, and generating zero waste.

The greenest city goal is not new – city council adopted that in 2008 – but the recent action plan delivers the next five years of strategy, drawing on years of public discussions, expert consultations, and follow up from green initiatives already in place. Director of Sustainability, Amanda Pitre-Hayes and Climate Policy Manager, Malcolm Shield delivered the report on Tuesday along with the staff team.

“Ultimately a renewable city is about making sure the city has a high quality life, that it’s livable, that we increase affordability over time,” says Shield. This demonstrable benefit is what Shield is counting on for the political leverage needed to coordinate with the key stakeholders.

“Vancouver cannot be an island of progress,” Shield says.

Transportation is one of the largest causes of greenhouse gas emissions, coming from gasoline and diesel-fueled vehicles. Influencing market-wide uptake of renewable energy vehicles is obviously larger than the city’s influence, so the policy focuses instead on readying the city’s infrastructure to support the market push when it comes. This includes things like a smart grid that will manage usage loads and more charging stations for electrical vehicles.

Buildings are the other critical target for renewable energy. Building codes are expected to change in 2020, requiring buildings to be carbon neutral. Carbon neutral requirements allow building owners to purchase carbon offset credits to bring the net emission to zero. By 2030, zero-emission will be required, meaning carbon credits cannot be used. Retrofitting will be required in existing buildings, at cost to building owners.

The financial impact was not touched on in council, but will be addressed as the strategies are worked out. The up-front cost to homeowners is a concern for Mayor Gregor Robertson.

“Over the longer term, any initiative that saves energy saves money,” Mayor Robertson said, “but the front-end investment can be challenging and we need support from the B.C. and federal government so people can afford to make that investment.”

Despite the many complexities ahead, the vision of a green city shines bright for Shield, “It’s ambitious,” he admits, “but achievable.”